Trev would do anything to protect his mom and sisters, especially from his stepdad. But his stepdad’s return stresses Trev—because when he left, he threatened Trev’s mom. Rather than live scared, Trev takes matters into his own hands, literally. He starts learning to box to handle his stepdad. But everyone isn’t a fan of his plan, because Trev’s a talented artist, and his hands could actually help him build a better future. And they’re letting him know. But their advice for some distant future feels useless in his reality right now. Ultimately, Trev knows his future is in his hands, and his hands are his own, and he has to choose how to use them.

Order From Greenlight books before Jan. 24, 2023 for your signed copy

Also available at these retailers:

“Packs a punch with a rapidly progressing plot and short chapters” . . . “This is an absolute must-have for every middle grade library collection.”

“An accessible, engaging, and heartfelt story.”

“A 12-year-old boy grapples with his ability to handle conflict without using his hands. Brief chapters, a fast-paced narrative, and simple language make this an accessible read. The characters feel relatable, and Trevor’s love for his community comes through clearly in the first-person narration. A short story with a lasting impact.”

“This intense page-turner by Maldonado (What Lane?) perceptively explores the complexities of one Black tween’s experience facing difficult situations, the effect that violence has on one family’s future, and the value of community when working through hardship.”

Hands  in the press

FOLKS FROM AROUND THE WORLD ARE LINING UP TO GRAB THEIR COPY. PREORDER YOURS! 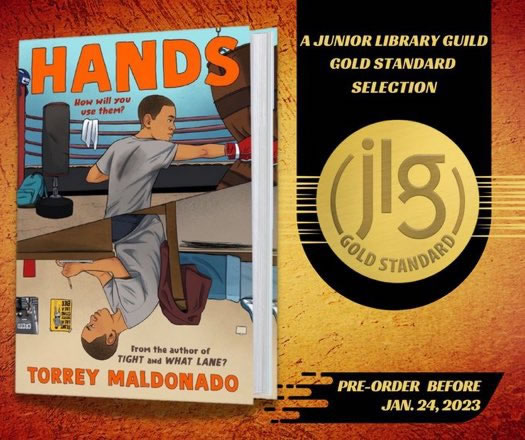